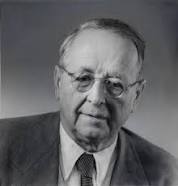 Hermann Klaus Hugo Weyl, (9 November 1885 – 8 December 1955) was a German mathematician, theoretical physicist and philosopher. Although much of his working life was spent in Zürich, Switzerland and then Princeton, he is associated with the University of Göttingen tradition of mathematics, represented by David Hilbert and Hermann Minkowski. His research has had major significance for theoretical physics as well as purely mathematical disciplines including number theory. He was one of the most influential mathematicians of the twentieth century, and an important member of the Institute for Advanced Study during its early years.[4][5][6]
Weyl published technical and some general works on space, time, matter, philosophy, logic, symmetry and the history of mathematics. He was one of the first to conceive of combining general relativity with the laws of electromagnetism. While no mathematician of his generation aspired to the ‘universalism’ of Henri Poincaré or Hilbert, Weyl came as close as anyone. Michael Atiyah, in particular, has commented that whenever he examined a mathematical topic, he found that Weyl had preceded him (The Mathematical Intelligencer (1984), vol.6 no.1).