The Taming of The Finest Bubbles 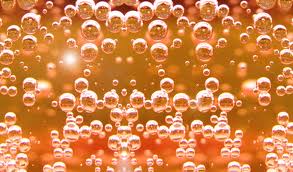 An initial burst of effervescence occurs when the Champagne contacts the dry glass on pouring. These bubbles form on imperfections in the glass that facilitate nucleation or, to a lesser extent, on cellulose fibres left over from the wiping/drying process as shown with a high-speed video camera. However, after the initial rush, these naturally occurring imperfections are typically too small to consistently act as nucleation points as the surface tension of the liquid smooths out these minute irregularities. The nucleation sites that act as a source for the ongoing effervescence are not natural imperfections in the glass, but actually occur where the glass has been etched by the manufacturer or the customer. This etching is typically done with acid, a laser, or a glass etching tool from a craft shop to provide nucleation sites for continuous bubble formation (note that not all glasses are etched in this way). In 1662 this method was developed in England, as records from the Royal Society show.
Dom Pérignon was originally charged by his superiors at the Abbey of Hautvillers to get rid of the bubbles since the pressure in the bottles caused many of them to burst in the cellar. As sparkling wine production increased in the early 18th century, cellar workers had to wear a heavy iron mask to prevent injury from spontaneously bursting bottles. The disturbance caused by one bottle exploding could cause a chain reaction, with it being routine for cellars to lose 20–90% of their bottles this way. The mysterious circumstance surrounding the then unknown process of fermentation and carbonic gas caused some critics to call the sparkling creations “The Devil’s Wine”.